HUSTLE
The Hustle gives us the fusion of Swing and Disco.

Discotheques with high quality sound systems and flashing lights became a popular form of entertainment in Europe and America in the late 1960’s and throughout the 70’s. In the early 1970’s a new dance craze became popular on the crowded dance floors of New York. This “Touch Disco” was called the Hustle. The Hustle marked a return to popular dances where couples danced touching each other. The popularity of modern and “retro” music with “disco” beat keeps this dance fresh, exciting and full of energy for today. 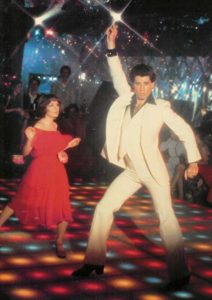 Disco music is normally written in 2/4 or 4/4 time with a strong bass beat. The melody and beat are based on rhythm and blues and the accent on each of the bass beats makes the music hard to resist.

Turns, spins and wraps are primary components of the Hustle. The more accomplished dancers will use syncopated timing and fakes along with elaborate arm styling.

The 1977 movie Saturday Night Fever showed both the line and partner forms of hustle, as well as something referred to as the “tango hustle” (invented just for that film by the cast, according to the DVD commentary). Afterwards, different line dance and couple dance forms of the Hustle emerged.  it has taken a place beside swing, cha-cha-cha, tango, rumba, bolero, nightclub two step and other partner dances in America.

Hustle songs and artists include:

If you want to learn more about hustle come visit : www.ballroomdanceinnyc.com or call to schedule your first introductory lesson – 212-256-1736- Andrey Stanev